The Gift That Keeps on Giving: Unwrapping Silverstream’s Success at the Annual Toy Fair

For the 6th year running, we provided Toy Fair with it’s own unique live TV channel, with our roving camera crews capturing the vibrancy and excitement from across the show floor and streaming to screens.

The Gift That Keeps on Giving: Unwrapping Silverstream’s Success at the Annual Toy Fair

After a wondrous end to 2017 most of us weren’t quite ready to rise from the hibernation phase of the festive period, but just over the horizon and into the new year we prepared to deliver our annual belated Christmas present - Toy Fair TV! Silverstream TV Head of Production, Rob Davey, discusses how we make it bigger and better each year.

With space selling out months in advance of the show, more than 260 companies gathered in the Grand Hall of London Olympia to showcase their new toys and trends for the forthcoming year. Alongside them once more, we were returning for our 6th consecutive year of delivering Event TV to the largest dedicated toy, games and hobby trade event in the UK.

Growing on the success of our preceding visits, we provided the fair with it’s own unique live tv channel, hosted by the now Toy Fair TV royalty, Anna Williamson and Gavin Inskip. Our roving camera crews captured the vibrancy and excitement from across the show floor, which was streamed live to a network of screens scattered around Olympia, as well as embedded directly onto the Toy Fair website. Anyone in the toy industry unable to attend the show could keep up to speed with all the latest trends and happenings by watching online - and thats exactly what they did, with our records showing over 1,000 unique viewers of the online stream each day. 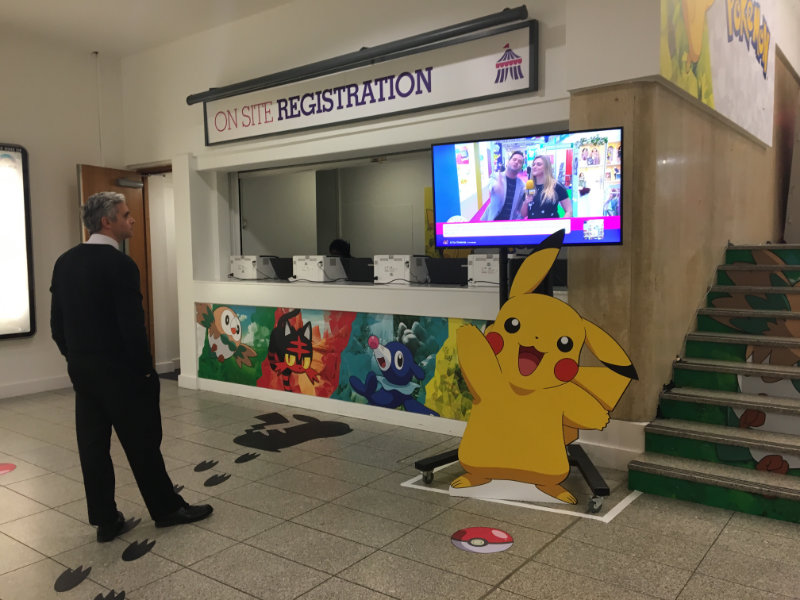 Those watching at the event were also aided in locating any particular company that interested them, with our live graphics system enabling us to inform viewers on who was talking, which product they were showcasing, and where they could be found in the hall.

One of Toy Fair's catalyst features has been the Demo Zone - a feature area allowing exhibitors to have their newest toys demonstrated and reviewed by a group of children of various ages (the Toy Testers!). Our roving camera team captured this live and was transmitted around the halls and online. This helped to give the exhibitors an opportunity to show their products to a wider audience, whilst being reviewed first hand by the product’s primary users.

With many elements of the show specifically designed to cater for the element of a live channel, Toy Fair TV continues to be an imperative element of the annual event. Our latest technology and equipment allow the BTHA to benefit from the power that live video production can have on their event - and they’re not alone. Organisers alike are beginning the realise that video production is no longer a nicety for a successful exhibition - it’s a necessity!

"Toy Fair TV gets better each year, with new ideas and more exhibitors wanting to participate. This has brought a whole new element to the show, making the exhibition that bit more exciting, creating a real buzz around the hall as the cameras roam the aisles. Not only is this beneficial to us as organisers, but incredibly valued by our exhibitors as the manufacturers look forward to promoting their new launches around the screens at the show but also to a wider audience on our website via the live stream.
The fantastic and hard-working Silverstream team make the process seamless and fun and we can’t wait for Toy Fair TV 2019!"